I have no idea why I’m obsessed with cover art of fantasy novels. I bet there’s a forum somewhere where the poor cover artists slam my acting etc. to give a little payback. Serves me right.
I’m going to make a concerted effort to NOT be quite as snide about stuff, because poor Patrick Rothfuss got quite a Flogging a few posts back on his cover differences (I do love his new paperback cover, but I also like the leaves hardback cover without the guy, forgot to mention that!) After a short browsing of new novels, I notice a trend that I wanted to talk about. Here’s my latest contemplation.

I don’t know if I’ve written about it, but C.S. Friedman’s “Coldfire” Trilogy might be my favorite trilogy ever. I have the first edition hardbacks on my shelf because I love this series so much. Her Sci-Fi stuff is great as well, and when I saw her latest book last year, I grabbed it in hardback. “Feast of Souls” is a great magic/epic/vampirish-hybrid book that make me drool for #2. I was putting pre-order books in my Amazon cart today, and noticed that the paperback version of this book was release. (But not a release date for #2 anywhere, damnit!)

Anyway, check out the new graphic for the paperback: 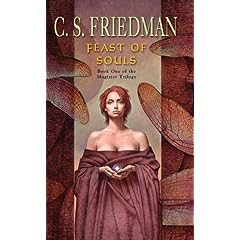 Soo, what’s going on here? Same trend from Mr. Rothfuss’ book. Hardback (Expensive) edition, is cartoonier, kinda reminds me of a TV show still about a teen goth medieval chick. Paperback has a way more adult feel to it, racier, more sci-fi even. Is there market testing going on here that a more “traditional” fantasy cover is better for a hardback and then “less genre” is better for expanding the audience for the cheaper option? Anyone with insight about this, let me know, it’s very curious! It seems to me that you want to “brand” your product from beginning to end with something distinctive. I mean, as much as I disliked the covers for the “Wheel of Time” (stumpy humans anyone?) you knew instantly that it was a Robert Jordan book when you looked at the shelf.

To be honest, I’m kinda torn between the “Feast of Souls” covers. Having read the book, I almost feel that the hardback is a better representation of the book as a whole, but the paperback version is more mature feeling, and since the book was a lot grittier than I expected (Less paranormal fantasy that I thought it would be, more epic fantasy) maybe the paperback is better.