Of all the Social Networking junk I’m a member of, none feels as functional and “ah, I love having that!” as Goodreads. For those who don’t know, it’s a social network for book readers, where you can tag and review books you’ve read and connect with your friends and other readers. I struggled with other ways to share the books I’ve read and this is the perfect solution. The interface is very easy to use, and adding/reviewing books is so satisfying. I feel like it’s a real, functional catalogue of something that I’ll appreciate having in 5 years, unlike most. And it has great portability, so I can add the widget to my Facebook, Myspace, Bebo and this website. Anyway, if you love books and read a lot of them, I urge you to create an account and friend me!

On to reviews. These are by no means all the books I’ve read the last 2 months, but they’re the ones that stand out as shareworthy.

I reviewed the first book in this series earlier this year, The Blade Itself and the fantastic thing is that the second book, Before They Are Hanged, meets and exceeds what I enjoyed about the first one! The characterization is fascinating and gripping. Joe Abercrombie really masters the “grey area”, where no one is a two-dimensional bad guy, and you’re constantly questioning the motivation of people who you thought were on one side or another. I really enjoyed the “foppish” nobility being made fun of, and there are twists here that make you go “WHOAH! I didn’t see that coming!!” There are some main characters who seem a little underrepresented in this one who were very prominent in the first book, but that only adds to the depth of the whole cast, and I can’t wait to see how these ends are ultimately tied up in the trilogy finale! I sense a very dark path going in unexpected directions. 😉 If you enjoy George RR Martin or Stephen Erikson, I would definitely recommend this series. PLUS, the cover art is really top notch! It is very classy, implies a Dumas-like adventure, and doesn’t have badly-oiled pecks or men with shields. Not only that, it has a great textured paper you don’t see very often, nubby and parchment-like, and I really enjoyed holding it, so + 2 to superficial appeal!

“The Blade Itself” epitomizes the more gritty fantasy approach that is emerging as the standard for epic fantasy. I have a theory about this. The emergence of Harry Potter and other “lighter” fantasy, with magic and wizards and more tongue in cheek attitudes, coupled with the more urban “romance” fantasy genre (more angled towards women), has caused the epic fantasy to go towards a more man-appealing direction. Less frou-frou and more blood, hair and guts in the vast sweeping epic-type of series. Tell me what you think about this direction, do you like it? Do you miss the more Robert Jordan approach? 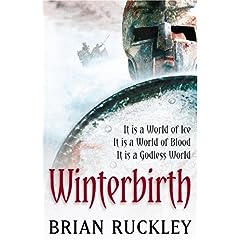 The chest-hair type epic is also the kind of book Winterbirth, by Brian Ruckley is. I have to admit, this was a much harder read for me. It’s very interesting from the world-building angle, Gods abandoning the world after a huge genocidal war. I enjoyed the history and detail in the backstory. Also, it’s SUPER LONG, which never turns me off as I tend to love books thick enough to kill cockroaches with, but I really had a hard time connecting with these characters. It was almost TOO vast in scope, too many points of view going on. I tended to skip whole sections, eager to land back with the characters and plotlines that held my interest. I think it’s a tough balancing act to have so many angles of storytelling going on, and naturally ones will be more interesting than others, but it was still difficult for me to finish the book. I think better editing could have improved this book a lot. If you are a big fan of machismo sword and shield fantasy, I still think you’d enjoy it, (it’s been very well reviewed across the web) but personally, I will be on the fence for the follow up. The cover art is great, very “300”, and the font is nice and simple. See, I’m not a total negative Nancy!!!

Another interesting grey-area book I just finished is
“Empress” by Karen Miller. I haven’t read her first series, the Innocence Mage, but I am going to pick it up based on this one.

This is a book told from the angle of the “bad guy”. I don’t want to spoil anything, but it’s a very interesting character study into the mind of religious zealotry and meglomania, and seeks to explore the question “How does that evil genius become that way?” This is not a book for everyone. I admit, I skimmed the middle quite a bit, but I was definitely invested in seeing where in the world this completely heinous character was headed, lol. I hear the sequel is done from a completely different angle, and I am interested to see how they support each other.
When I picked it up, I was expecting a much different story, a story following a woman who would become leader to a warring nation, faced with challenges. It’s SORT OF starts out like that, but then you realize, “Wow, this character is…not a good guy!” Interesting experience. 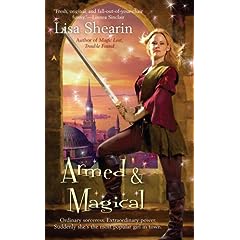 Lastly, men and women…it’s Vaginal Fantasy time!!! “Armed and Magical”, by Lisa Shearin (Who has a great blog BTW) is the sequel to the MUCH raved-about-by-me first novel in the series “Magic Lost, Trouble Found”. The adventure starts almost continuous from the ending of the last book, and I’m glad because I don’t want to miss one minute! Guys, this series is like chocolate to me, I just can’t get enough of it. The author strikes a balance of adventure and fun that is the very reason I love reading in the first place, and the second book serves up a dish of enthusiasm and magic and touches of romance I ate up like a little literature-piggy! Nom nom nom! If I had my druthers, I’d have this on Sci-Fi channel with me starring in it. I’ve always wanted to wear a Jerkin. Make no mistake, this series is not deep, it’s not dark, it’s a magical romp with fun characters. It encompasses the best of the urban fantasy genre that is so popular right now, combined with a whimsical sense of humor. I really, really want the love triangle to be fleshed out in the next book, oh and for Raine to kick more ass. Again, if you like Buffy, definitely check out this book!

Sadly, I’m going to have to say it again, this cover art is…not good. If you compare this cover to the last one, besides the much-improved ochre tones instead of blinding pink and purples, it looks like Raine has gained a little weight in the thigh/butt area. I guess the ship voyage over to the island didn’t allow her to exercise or something. Call me crazy, but I’m pretty sure the way Raine is described in the book has NOTHING to do how this chick looks! Maybe I’m biased because I worked with someone who looks like this, Sami from Days of Our Lives (first Hollywood job, not the best experience). Anyway, the book rox.

That’s it! Please post any books you guys have enjoyed lately, I’m on the prowl!