Well, I have several books I read the last few weeks,  a few of which I didn’t love, but I want to be fancy and add their covers here anyway. 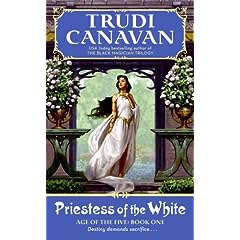 First up is “Priestess of the White”, by Trudi Canavan. I actually like this cover. The colors are nice, and it promises to be a good vaginal fantasy series; pretty girl in toga, I’m seeing hot guys with two-handers in the mix. Well, not so much. I have many criticisms for this book, not least of which is that the prose felt rather young-adult in tone, although it is sold as an adult book, with the random sex scene thrown in to boot. Also the main character, Auraya, is special and gifted from page one, and then she just gets more special and more gifted from there. Not the most exciting arc. There’s a weird romance that I never really bought as well, so I started flipping pretty fast through to the end. I liked the concept of having Gods use priests as their earthly vessels and appear in person to them, but the magic powers seemed pretty arbitrary and in the end, it was an easy decision not to pick up the next in the series. I read this author’s other series “The Magicians Guild” and I would recommend it over this one. 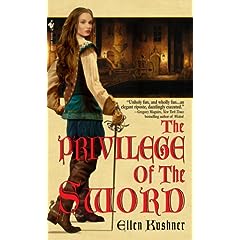 Next is “The Privilege of the Sword” by Ellen Kuschner. I was really exited about this book. I read several reviews on various blog sites that were raving, and I loved her previous book “Swordspoint” so much. This new book shares the world and a few characters with her previous one, but it’s not necessary to have read the first to understand the second. I enjoyed this book, but I couldn’t help but have a little bit higher hopes for it. It’s fairly standard chick-lit mixed with a Dumas flair, almost like it could be a Disney film starring a plucky Anne Hathaway, who learns fencing on her crazy uncle’s bequest despite the scorn of society. Except there’s some strange sexual ambiguity that I still can’t figure out after finishing the book. Regardless, I really liked the characters, and I read it in one night because I really wanted to know how it ended. I suppose that was all the enjoyment I could expect! Oh, and this cover is pretty hot. I love the font and the girl, so five stars for that!

My favorite book in this group is “Mistborn” by Brandon Sanderson. Every so often, you discover a book with a magic system that makes you go, “Wow! That’s awesome! I want to be able to do that!” I can’t recommend this book enough to anyone who loves to read about interesting magical systems, and really good world-building. Not since Robert Jordan have I been so “bespelled” by magical creativeness. I really really liked this book, I liked the main character, I loved her mentor character, and the evil forces were interesting. Vin, the main character, picked up her talents a little quickly, sure, but hell, we’re not paying to read about an untalented bimbo. Fantasy characters are preternaturally gifted and learn things swiftly because they are invariably “Chosen”, you gotta buy that concept when you sign up for the genre. The only criticism I have is that the characterizations were pretty slim, you don’t really have much affinity for the secondary people in the plot, which could have made for an emotionally satisfying ending. Nonetheless, I will eagerly buy the next one in hardback!

Wow, that was a lot of vagina book. Let’s get in some penis! Too bad I’m not into it 🙁 The book, not penis. Ahem.

Ok, chalk up Gene Wolfe and Stephen Donaldson together in the Felicia column of “I’ll never like these dudes and their writing even though I know I should.” I don’t know how many times I’ve picked up the “New Sun” books, or the Thomas Covenant series and struggled to appreciate them, longing for something to click in my brain and I’ll gobble all the yummy novels up. It’s not gonna happen. This book is the first in an epic trilogy, and I would definitely recommend it to boys everywhere if they like a very high tone, fairytale-esque, brutal boy world. It’s strange and the prose is beautiful and I APPRECIATE it, but after 2 weeks on the nightstand, struggling to get myself to finish, I had to call it a day. In the future I hope to come back to it as I did the Elric series which I now love, but for now, I would kinda rather read a horrible “girl finding secret powers through sexy mentor” book any day. I’m trashy, what can I say. 😀