I read 4 books over the week, it being a holiday and all,  and I want to start out with the one that made the most of an impression, both good and bad. 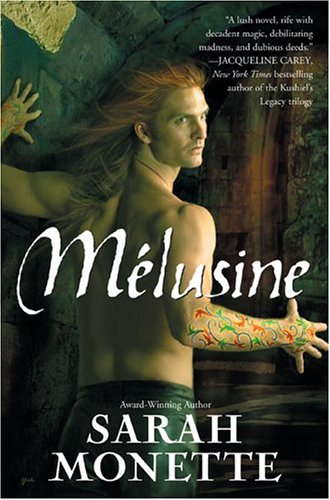 Yes, I made it that big to show how finger bitingly, mind numbingly horrific this cover art is.  Where to start…well, his hair is brassy, like he used Miss Clairol then went in the pool a lot, he’s wearing LEATHER PANTS, DO YOU SEE THAT?!  His skin has a green cast to it that just screams hepatitis to me, and he seems to be holding something like a barrel or a bag of groceries that was horrible photoshopped out, like this.  It’s pretty obviously to me they also photoshopped some muffin top off those leather pants, but who can blame the model for pouring over a pair of used pants from Melissa Etheridge.  They obviously just posed some model and slapped him in front of a vaguely medieval backdrop, and then were like…”Oh, let’s make it more magical…let’s use a free floral brush and slap some red and green marks on his arm, like he’s being slowly eaten by Christmas tinsel.”  Explains the look of agony on his face, no?

Whew, ok I got THAT out.  So you might wonder, “Wow, Felicia is being pretty brutal here on this book” and I would answer, “Because I’m so mad for the author BECAUSE IT’S REALLY GOOD!”

I passed by this book several times because the cover art is so embarrassing.  I got it only because I was collecting for a trashy fantasy weekend.  The crazy part is I loved the writing so much, and I know that the right audience will not pick it up because of the cover, and that makes me angry because it deserves to be read.

I mean, there isn’t even much romance in this book.   The main characters are both MEN.  One of the main characters is gay, so maybe the marketers thought men would be put off because of that and so marketed only to women, but a girl looking for a story about a hunky guy and an innocent magical girl would be VERY disappointed here.    I liked this book a lot because it was character driven above all, a welcome relief to some of the more plot-heavy books I’ve been reading lately.  I have some issues with things in the book, like how the magic system really works and why some really great secondary characters disappear halfway through the book, but since this is a series, I will forgive that because I can’t wait to get the next one and see how they re-enter the picture.  I appreciated the simplicity of the story and really liked the way the world and the characters were drawn without cliches of the genre jumping out into my face.  There’s a reserve and beauty to the prose which I couldn’t stop reading.  Anyway, I would definitely recommend this as a great first novel of the author, and I will be going to get #2 and #3 today.   Just, turn the cover over at checkout 🙂

I also read the next two books in the Briar King series, the Charnal Prince and the Blood Knight.  Plot heavy is an understatement here, and I found myself definitely skimming through a few character’s chapters to get to other character’s chapters, but I still really like this series because it embraces all the requisites of a big epic like we’d expect, and then throws some twists into the plot that surprise you.  The third book is not NEARLY as good as the first two, and I dunno about this trend of turning the trilogy into a quadrogy or whatever it’s called.  Both these series I’m talking about now are 4 parters, and I’m wondering if that’s not just a creation of the publisher to squeeze out another book, rather than a requirement of the series’ story needs.  The Blood Knight certainly lacks the drive and progression the first two do, but I am eager to read the fourth in the series, out next year, to see how he wraps things up.

I read the Bourne Identity book, just to get out of the genre, and found myself yawning to death.  Seeing the movie definitely ruined reading this book for me, and I dropped it halfway through to play Gameboy. 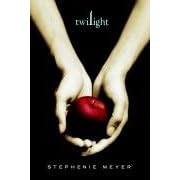 by Stephanie Meyers.  I saw these books featured at the bookstore and picked one up because they are HUGE bestsellers.  I saw that it was Young Adult, but some of my favorite books are classified as such, so I gave it a try.

If you are 12-18(maybe), you will LOVE this book.  I wanted to smash my head open with it.  High school as a venue in general does not interest me, and this book is about a 17 year old girl who’s “clumsy” and feels like an “outsider” who falls in love with the INCREDIBLY good looking vampiric 17 year old who everyone lusts after.  All I can say is that it gets about as racy as overwhelming passion during a kiss and then “No, no…you’re too delicate.”  ugggggh, just get it on!  I got pretty tired of the vampire guy treating our hero like she had tissue paper for skin, and yet she seemed to LOVE it.    It’s perfectly aimed for its audience, but for adults who like the genre, I would definitely think their patience would be tried as much as mine was.  I wanted way more to happen than shopping for prom dresses and lying to her father.