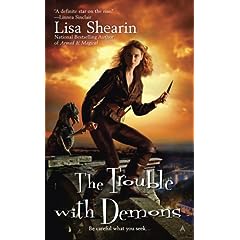 My Kindle has smoke coming out of its ears I’ve been reading so much lately.  A 12 hour plane ride to England and back helped me polish off quite a few exciting reads I was itching for!  Most of them lean towards the girl bent, and I promise to delve into more man-friendly literature in the next few months, if only for a personal change of pace.  I read a bunch of great books though, starting with the latest installment in the Raine Benares series The Trouble With Demons!  I think I love this series so much because:

a) It’s written in the tone of all the popular urban-fantasy that are the rage now, but it’s set in a believable, not cheesy “olde fantasy” world.  Not many series pull that off. The magic system is well thought out and the elves aren’t poncey.  Bonus.

b) The writing has an unforced sense of humor which makes the characters very likeable and believable.  I actually laugh out loud sometimes when I read these, not common with me.

c) The plotting always feels like a romp.  The adventures and conflicts the characters fall into remind me of playing a great video game or D&D game. I always feel like I’m present in the action.

c) There is a believable sustained love triangle that has lasted 3 books without the characters hopping all over each other, GASP!  Delicious romantic tension that makes me eager for more!  (I’m rooting for the paladin of course 🙂 )

BONUS:  Even though I read this on the Kindle, the cover art has improved immensely from the first two (less pink FTW!), so read away! 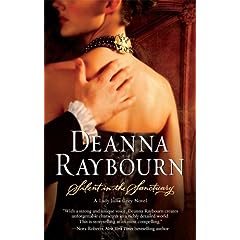 Next, as a refreshing rinse from all the vampire/fantasy stuff I’ve been reading, I picked up a mystery series with three books (so far) starring Lady Julia Grey. The series has a strong romance plot, but I wouldn’t pigeonhole it only as romance because the mystery is very good and the characters are great, very involving.  I read these in England, and the author clearly loves Jane Austen and Wuthering Heights and Rebecca and I found it very evocative to read them while hearing people with British accents, LOL.  Fortunately for me, I read these again on my Kindle.  Look up at the cover art and you can see why I’m relieved.   Book 1 has a great cover, books 2 and 3 want to make me slit my wrists.  A dismembered man hand and cheap flammable prom lace do NOT help sell these books!  For God’s sake, go back to the original cover art, it’s much more appropriate!  Love the series though, will be looking for more. 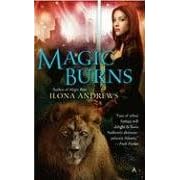 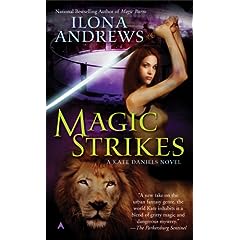 Last (but certainly not least, check my GoodReads account for all my latest updated books) I read the third in Ilona Andrews’ Kate Daniels series.  At this point you probably can’t suggest an urban-fantasy/urban-paranormal-romance series I haven’t at least TRIED to read.  If it isn’t on my GoodReads I probably forgot to add it (or wanted to forget it).  Most of these books aren’t that great and seem like Buffy rip offs.  Maybe because I was ON the show, my patience runs thin and if I see another description of a dark tormented vampire who makes a gun-toting, leather-pants-wearing heroine light-headed with desire while she’s kicking his ass…well, I’ll do something bad 🙂  but this series definitely is one of my favorite of the genre.  There are vampires and werewolves and werelions, etc, but the world is so well put together and justified, and, more importantly, the characters are believable and have real relationships and care about each other.    The writing is witty and exciting and the series seems to BUILDING to something rather than just being stretched out for sequel after sequel.  Thumbs up in a very crowded genre!

I read about 8 other books on the trip, a few about the Black Plague because…I love the Black Plague, LOL! Now I’m planning to focus on some Sci-Fi now, or some straight mystery for a change of pace.