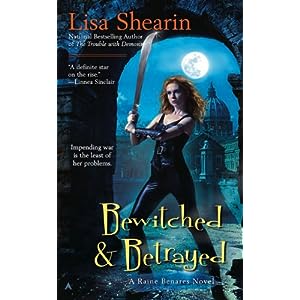 I kind of went overboard last year with the whole Urban Fantasy book crazy.  I’ve now reached the point where I can’t take one more “emotionally wounded and hot, but kick-ass vampire/fairy/werewolf/zombie killer heroine” in love with a “dominating but inside-hurting immortal hunk”, ugh!  That’s why when I find a series that has all the good parts of the UF genre mixed up with things that break the cliches, I’m rabid to see what happens.  And this just released installment in the Raine Benares series continues to be one of my faves!

This isn’t “Urban” per say, but the stories take place in a fantasy-world urban environment.  I guess you could call it a Fantasy Adventure series with a bit of (not-graphic) Romance thrown in, which is way too long a pitch, but maybe that’s why I like it so much.  Reading this is like living in an old Bard’s Tale game, accompanied by snappy sidekicks. Yeah, that’s why I like it 😀

Bewitched and Betrayed continues the story from where the last left off, and as always, the plot is a like a great D&D romp through a fantasy world, where Goblins aren’t tiny and ugly, but green-tinged and hot, with fangs and biceps, a clever twist on the hot vampire cliche.  The love triangle between Mychael and Raine and Tam reaches a conclusion in this one (no spoilers, but YUM!), and the ending opens the door for the next book to travel to some really cool places we haven’t seen before.  But the best thing about the series continues to be the characters.  I just love the rapport between Raine and…well, everyone.  She’s self-deprecating and always has as sense of humor no matter what mishap she stumbles into, even when it looks like she’s gonna, you know, die and stuff.

There’s great snappy dialogue throughout that makes you want to be a part of this strange, fantasy family, from the “muhahaha” bad guys, to the magic-powered teen characters Raine has to wrangle.  And there are many great fight scenes.  Lots of stabbings.

I actually corresponded with the author after I trashed the cover of her first book (awkward!), but would be remiss without a few candid comments because guys…things aren’t better:  I mean, what is WITH HER OUTFIT?!  I’d let the corset slide, but the pants look like they’re flammable plastic from Hot Topic.  No way do they look sturdy enough for romping through a medieval sewer pipe!  Also, the hair?  Raine, you’re in serious need of a hot oil treatment. There’s gotta be a spell for that, girl!  I WILL say that compared to the last book, she’s slimmed down in the hip area, I guess all the stress from being tied to an evil artifact makes a girl burn more calories, but, that’s as nice as I can get. 😉

If you haven’t read the series, start from the beginning, and if you’ve been a fan all along you won’t be disappointed with this newest installment.  And if you have Urban Fantasy series you’re STILL rabid for this year, please post in the comments for everyone to discover more guilty pleasures 🙂