I just finished watching a few of the new shows on TV, I watch them all of course, and somehow coincidentally I watched “Chuck” and “Big Bang Theory” back to back.   Nerds on TV overload!

Most of the time the “nerd” character in Hollywood grates on my nerves.  There were moments in each of these shows where I was like, “Uh, stereotype” but for the most part I’m eager to have a little more brains on TV and these shows may very well fulfill that.  Oh, except for the girl characters.  They went with the cookie cutter blondes on that front.  I guess one step at a time!

First “Chuck”.  It’s been trendy the last few years to have nerd sidekicks, but it’s nice to see the geek have his glory as a lead.  I liked that Chuck wasn’t such a stereotypical nerd, and it looks like the series could go some cool places, but I’m reserving judgment on whether I’m raving.   It seems like the show is trying to do a lot at once, and I guess a few more episodes will tell if this will stay on my Tivo or not.  There are a lot of suspension of disbelief moments in this, some tres cheesy, but I do like the lead actor, and the whole Best Buy ripoff workplace could provide some funny story lines.  It looks like they will be going with more of the espionage angle though, so I’ll just watch and see.   After seeing Gossip Girl (UGH) this show was amazing in comparison. 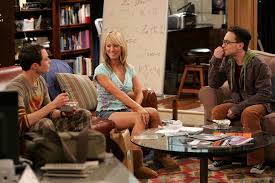 “Big Bang Theory” I really wanted to hate, but thankfully there were many moments where I laughed out loud, more than any other comedy I’ve seen since The Office season was over.  It’s really well written and acted.  At first I was like “Oh no, they’re playing stereotypical nerds” but after the first scene I really got into the clever dialogue, and I love the fact that, for once, the actors weren’t reading their lines to the rafters.  For some reason they direct sitcom acting SO BIG lately, and the offhand delivery here was so refreshing.  The guy playing Sheldon particularly charmed me, his line delivery reminded me of Niles from Frasier.  I have no idea why the girl’s character would ever hang out with these guys, but I decided to go with it because I wanted to see more of the guys’ characters.  I definitely will keep watching this.  And not only because they had a WOW screenshot in it 🙂 but because I don’t want the sitcom to die as an art form.  And if Chuck Lorre has to save it singlehandedly, then so be it!